Even before the vice presidential candidates of five political parties took to the podium on Friday, December 14, 2018, it was already a theatrical event, mostly due to the exclusion dozens of other candidates. Or the particular exclusion of one person that made the most fuss about it.

And despite the protests against the screening process and a demand to stop the debate until certain candidates were included, it went ahead with the original cast of current vice president, Yemi Osinbajo, of the All Progressives Congress; Peter Obi of the Peoples Democratic Party (PDP); Khadijah Abdullahi-Iya of the Alliance for New Nigeria (ANN), Umma Getso of the Young Progressive Party, and Ganiyu Galadima of the Allied Congress Party of Nigeria (ACPN).

Osinbajo was always going to be put on the back foot for the debate strictly based on the fact that he’s part of a government that’s largely disillusioned many, so defending his government’s track record was going to be recurring thing, and it was for most of the night.

Obi was a terrific standout during Friday’s debate as he hit hard, mostly at Osinbajo, on the present government’s economic missteps which he noted was responsible for all of the nation’s other biting problems such as inequality, unemployment and insecurity.

Obi’s knowledge of the economy was not exactly a surprise to many. He’s well-known to be the guy that can talk up a storm when the subject is exactly that, and he excelled at it, mostly reeling out facts and figures on many other subjects.

These facts and figures are not always true, like when he confused the figures for the number of Nigerians living in extreme poverty with unemployment figures, or when he curiously mentioned that Nigeria moved from number 7 on the list of most-terrorised countries in the world to number 3, a terrible half-truth.

Osinbajo was a culprit of economising the truth, too, as he made questionable assertions about “taking at least 400,000 people so far out of poverty line” with the conditional cash transfer; or the consistency of the growth of the nation’s gross domestic product (GDP).

Throughout the night, the other vice presidential candidates mostly trailed behind the two leading candidates, which was not a surprise. Despite some major speech hiccups along the way, Abdullahi-Iya performed admirably well and came closest, but not like really close, to the Obi-Osinbajo duopoly in expressing her party’s vision and her capacity to act as vice president.

37-year-old Getso displayed a lot of inexperience and most-criminally failed to put much effort into many of her answers while also struggling to articulate the plans of the man leading the ticket, Prof. Kingsley Moghalu, a former deputy governor of the Central Bank of Nigeria (CBN), and a sound business mind.

Galadima’s overall performance left a lot to be desired, leaving many to wonder how he managed to convince 40,311 Nigerians to vote for him as a presidential candidate in 2015.

With that highlight done, what did anyone take away from that debate, really?

The potency of debates such as this has been debated for years by political pundits all over the world. A report by Denise-Marie Ordway and John Wihbey on the effects of presidential debates discovered that the importance of the entire process might be over-inflated by all involved.

It’s irrelevant to argue the right of the electorate to get a chance to hear prospective leaders debate key issues before the polls, most especially in a country like Nigeria where there is a communication gap between leaders and the led. However, the ‘dramatic effect’ that these debates have on voters is contentious.

For example, then-sitting president, Goodluck Jonathan, elected to not participate in a presidential debate organised by the NN24, a cable channel, in the run up to the 2011 presidential election. His three biggest challengers at the time, Muhammadu Buhari of the Congress for Progressive Change (CPC), Nuhu Ribadu of the Action Congress of Nigeria (ACN), and Ibrahim Shekarau of the All Nigeria Peoples Party (ANPP), all participated in that debate with Jonathan’s notable exception.

In revenge, all three failed to appear for the presidential debate organised by the Nigerian Election Debate Group (NEDG) and the Broadcasting Organisations of Nigeria (BON), the debate Jonathan preferred to attend. He was the only one on the podium that night, debating himself. He won the election. 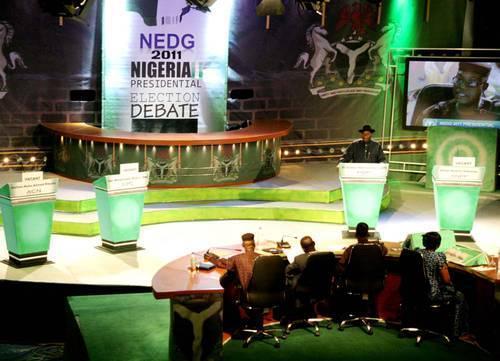 In the run-up to the 2015 presidential election, Buhari continued his boycott of the NEDG-organised debate where Jonathan appeared again (not alone this time) and failed to debate. He won the election, making history as the first opposition candidate to beat an incumbent in a democratic election in Nigeria.

If Friday’s vice presidential election taught us anything, it’s that we don’t know much about the candidates outside of the top two parties. The debate showed clearly that the running mates of the new breed of politicians running for president are not as adequately-prepared for the spotlight as they’ll be required. Getso and Galadima are a stark reminder of this. Abdullahi-Iya fairs better than them both but there are chinks in her armour, too.

This is not to say Obi and Osinbajo had a blameless night. In fact, both were exposed to be men who can sometimes meddle with the truth, deliberately or not, to sell their points to the electorate that they wish are not too willing to probe.

Campaign promises made by Nigerian politicians, the hallmark of debates, have been established to amount to building castles in the air. To trust them wholeheartedly is to set yourself up for future disappointment.

For example, Osinbajo’s admission during the debate that the current government is paying fuel subsidy and his advocacy for its continuation for the foreseeable future is an incredible back-pedaling from Buhari’s previous promises to cancel the subsidy he so famously called a fraud.

The same air castles were what Osinbajo and all the other candidates were on the debate podium to build on Friday night, and there’s no saying with any certainty which ones would actually come to fruition regardless of who wins at the polls next year.

Even if debates don’t necessarily influence voters’ decisions, arguably, they expose candidates in quite interesting ways and this is why Nigerians can look forward to the January 19, 2019 presidential debate, especially if the president shows up.

However, as was evident on Friday night, if years of debates in Nigerian politics has taught anybody anything, it’s to always remember that talk is cheap.